Click above to hear a sample of our latest project. We’re working on a new program which will air on the Gospel Broadcasting Network (watch GBN here) in the future. The premise is just as the program title suggests: “the Bible is not boring!” It is exciting and fulfilling to drill down and study God’s Word. Each episode will follow the same format, a general topic which the four of us (Gary, Dale, Carl, and myself) will break down and discuss. Our aim is to help encourage Christians and open a door for those who may be searching for God’s truth out there. This first episode explores how to approach the Bible itself. We hope you enjoy!    –Neal

While politicians have quoted the Bible as far back as the founding fathers, have you noticed the trend especially in the last 20 years or so to use Scripture to push a policy or score a point? Perhaps it’s to pander to a group or to reinforce one’s position. During the historic impeachment proceedings in the House of Representatives, the Bible was “weaponized” by both sides of the aisle in embarrassing, repulsive ways. One side compared the impeachment trial of the President to Jesus before Pilate, producing a tasteless, horrific analogy. The other side ripped Romans 1:25 from context to admonish the President’s supporters as worshipping the “creature” more than the “Creator”–I wonder if this extremely liberal politician bothered to read the very next few verses? The God of heaven must be filled with righteous wrath over such misuses of His Word!

Unbelievers have long tried to weaponize the Bible against those who believe God’s Word is inspired. A favorite “go to” is Matthew 7:1 (“judge not that you be not judged”) as a shield for any number of immoral deeds which Scripture itself condemns. This is often an effort to turn what people claim to follow (the Bible) against them to defend their actions. John 8:7 (“let him that is without sin cast the first stone”) is a close second and used similarly

Yet, each of us needs to be careful not to remove a Bible verse from its context to make it say what it is not saying. Peter warned that “the untaught and unstable distort” the Scriptures to their own destruction (2 Pet. 3:16). Often, it’s a general ideas like “God wants me to be happy” or misuses of Scripture like “where two or three are gathered together in my name” to have it say what it does not mean.  Perhaps we defend our actions with our physical or Christian family by appealing to wonderful Bible concepts like grace, love, and freedom, but in effect weaponize them to suit our lifestyle choices. Scripture itself says these concepts can be misappropriated (Jude 4, 1 Cor. 13:4-7, Gal. 5:13, etc.).

Scripture is a powerful weapon which God intends for us to use in spiritual warfare (Heb. 4:12; Eph. 6:14-17). But, as with every weapon, it must be handled properly (2 Tim. 2:15). I must understand that God will be displeased if I misuse this omnipotent tool. Used properly and in context, Scripture is powerful. Used otherwise, we will hurt ourselves and probably others! 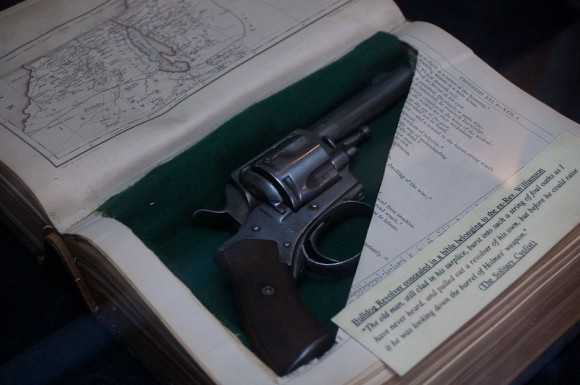 “Big dummy!” That can be a derogatory statement or the description of a large mannequin. Context makes all the difference! So it is with matters of infinitely greater significance. So much religious error exists because of a failure to consider the context of biblical passages.

Our friends in religion who believe that Jesus is a created being rather than one of the three everlasting personalities of the Godhead defend their view with passages such as Colossians 1:15, which says, “He is the firstborn of all creation.” A further study of the use of the word “firstborn” shows that it is used literally (Heb. 11:28) and figuratively (Heb. 12:23) in the New Testament. Context determines the difference. What is it in Colossians 1:15? The context says that Jesus made everything that was made (16-17). Did He make Himself? No, He cannot both be literally, physically born and be the One who created “all things.” Logically, Paul is speaking in a figurative sense, that in His human nature Jesus is “at the head of His class.” He is first in order, preeminent among men (18). As a human, He is above us and first among all of us.

Others of our friends teach salvation by faith only. They appeal to a couple of passages to assert this idea. One passage is Acts 16:31, where the Philippian jailer is told, “Believe in the Lord Jesus, and you will be saved, you and your household.” This is given as proof positive that salvation comes at the point of faith. Another text cited, the “golden text of the Bible,” says, “For God so loved the world, that He gave His only begotten Son, that whosoever believes in Him should not perish, but have eternal life” (John 3:16). This statement is made as part of a conversation Jesus is having with Nicodemus.

In the case of the jailer, who saw the miraculous power of God in opening the jail doors and who asked what he must do to be saved, he is told to believe in Jesus. It is noteworthy to ask, “How much would the average Philippian jailer know about Jesus?” Thus, Luke adds the important detail that before we read of the man’s response, “They spoke the word of the Lord to him” (31). His response is found in verse 32, where he washes Paul and Silas’ wounds and is immediately baptized. This accords with the broader context of Acts, where believers are told to repent and be baptized for the forgiveness of their sins (2:38; 22:16).

In the case of Nicodemus’ instruction, Jesus’ makes the statement of John 3:16 in a certain context, too, a context that included talk of water (3:5) and an illustration from the book of Numbers. That illustration is very noteworthy for showing that more than belief is necessary for salvation. It concerns the serpents God sent upon the murmuring and complaining Israelites. Numbers 21:9 says, “So Moses made a bronze serpent, and put it on a pole; and so it was, if a serpent had bitten anyone, when he looked at the bronze serpent, he lived.” How did salvation come, simply by believing in God’s plan or by believing AND looking? Likewise, the broader context of scripture shows faith and works joined together. Israel did not earn the saving of their lives by looking any more than we earn salvation from sin by believing and being baptized. Yet, God makes it as essential to obey today as He did during the wilderness wandering. Context bears this out.

Let us never be “scripture isolationists,” those who peel a verse away from its context or who rest our confidence in doctrines that have been thus constructed. God saw to it that we would have His word and will preserved. How wise of us to make sure we properly study it in context!