It’s an unconscionable thought! Who would try to hurt and oppose those dedicated to saving lives? Places like Afghanistan seem more than a world away from us, where this week a yet-to-be-identified terrorist group conducted a suicide attack in Jalalabad that killed two and injured 14. While that sadly is a relatively small and minor attack in this war-torn region, it was the target that was so outrageously newsworthy. It was perpetrated against the international Save The Children organization. Volunteers and workers were there to provide aid and assistance to that society’s most vulnerable members, and they were attacked. How does this happen?

In Matthew 23:35 (cf. Luke 11:51), Jesus condemns the Pharisees as the murderers of God’s godly men from Abel to Zechariah. Essentially, Jesus was presenting a roll call of the righteous who were attacked because of their faithfulness. In one of Stephen’s final moments, he preached, “Which one of the prophets did your fathers not persecute? They killed those who had previously announced the coming of the Righteous One, whose betrayers and murderers you have now become” (Acts 7:52). Both Old and New Testaments reveal the Maker’s messengers who were attacked while trying to save others. The proverbial response of the hearers was to “shoot the messenger” (cf. Heb. 11:36-38).

Growing up a preacher’s kid, I saw my dad encounter some who attacked the messenger. Dad has always been a model of courage for me, willing to teach and preach even unpopular, but needed, subjects. Consequently, he endured both frontal and sneak attacks. Everyone who has sought to declare “the whole purpose of God” (Acts 20:27) has some appreciation for Paul’s warning that some “will not endure sound doctrine; but wanting to have their ears tickled, they will accumulate for themselves teachers in accordance to their own desires, and will turn away their ears from the truth and will turn aside to myths” (2 Tim. 4:3-4).

As eternal aid workers, we operate by a different, higher set of rules (2 Cor. 10:4). We entrust ourselves to the One who will give us ultimate victory. Meanwhile, we cannot give up our cause—no matter what the threat or danger. Like Jesus, let us keep entrusting ourselves to Him who judges righteously (1 Pet. 2:23)! 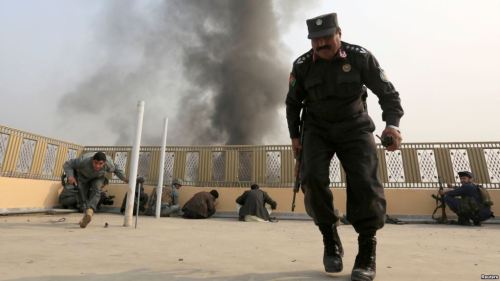 In the wake of the recent siege on an upscale mall in Nairobi, Kenya, the Kenyan Government has mentioned the possible role played by American teen boys and a British woman–perhaps the infamous “White Widow” linked to the London Bombing in 2005–in the deadly attack led by Somali militants.  Since our nation went to war after the attacks on September 11, 2001, the government has frequently stated that this war is unique.  It is not against a particular nation per se or even a specific religion.  It is against particular people, bound together by a similar philosophy, mindset, and methodology.  Such a war is difficult to prosecute, since a front might pop up in Indonesia, Kenya, or no one knows where.

As formidable, frightening, and frustrating as such a foe is, Christians of every generation have been engaged in similar warfare.  It is not with people, but the devil (1 Pet. 5:8).  The warfare is most unique.  Paul writes, “For though we walk in the flesh, we do not war according to the flesh. For the weapons of our warfare are not carnal but mighty in God for pulling down strongholds, casting down arguments and every high thing that exalts itself against the knowledge of God, bringing every thought into captivity to the obedience of Christ” (2 Cor. 10:3-5).  The warfare, weapons, and tactics are unconventional and spiritual.  We do not conquer by subjugating or injuring–we lose if we do that.  In fact, we are not the conquerors in this sense.  The battle belongs to the Lord.  Victory occurs when those fighting for the enemy leave his camp and come over to the Lord’s side.

We personally wage that war here at home, but the battle rages across the planet.  We may wage it thousands of miles from home, but our fellow-spiritual soldiers all over the world are armed with the gospel and on the front lines. Unlike the war on terror, Christians know this battle must rage until Christ comes again.  May we never surrender!

I was in Harrisonburg, Virginia, holding a gospel meeting for the Central congregation.  In the mornings, I was putting finishing touches on lessons on the Conquest through Divided Kingdom which I would be teaching the next week in Coimbatore, India.  That was what I was doing on Tuesday morning while Kathy took our small sons, ages 7, 5, and 3, to a nearby park to play.  Just before 9 A.M., I had the door of our hotel room open when a tearful hotel maid in broken English told me to turn on the TV, that it was very bad news.  It was Matt and Katie on the Today Show, breaking the awful story of a plane crash.  Then, a second plane hit and it was immediately apparent that this was no accident.  While the word “surreal”—bizarre, like a dream—is overused, the events of 9-11 fit the definition.  Suddenly, things changed.

My mission trip to India would ultimately be cancelled, as we were scheduled to leave from Reagan International.  The mood during our gospel meeting changed. There was a change, an increase, in spirituality in the hours and day or two which followed as evidenced even in normally irreverent late night television.  The nation was on high alert, gripped by fear, as three of our landmarks were struck by terrorists and a fourth was spared only after heroic efforts of passengers on a plane over western Pennsylvania.

But more fundamentally, plans for 2,996 people were most permanently changed.  That many people who woke up alive on September 11, 2001, would die in the terrorist attacks.  This included people in the World Trade Center, Pentagon, four commercial airplanes, and emergency responders.  Only God knows how many of them were prepared for death, but no doubt only the hijackers knew that death was about to come for them.

Before and after 9/11, large numbers of people died in airplane crashes, building fires, and other sudden tragedies.  More than 150,000 people in the world have their plans permanently changed by the coming of death.  Matthew 7:13-14 would indicate that the vast majority of them are unprepared for death. Someday, death will change our plans.  Thanks to Jesus’ death, if we have obeyed Him and serve Him faithfully, our death will mean changing from temporal pain to eternal peace.  Do your plans include Jesus?