The title above, PRCHNG1, was once the vanity tag on a truck I owned. When in 2004 I said a sentimental goodbye to the “Black Bullet” (as Kathy affectionately named my 1985 Chevrolet Custom Deluxe pickup, which I traded in on a “new” 1992 Dodge Dakota), I transferred the tags down at the DMV.

As I picked up a number at the front counter, I had my tags in hand, and the receptionist saw them. It launched an interesting conversation.

I was puzzled and said so.

She said, “Your tags. How long have you been parachuting?”

You may have surmised by now that my tag stood for “Preaching One.” I worked with DMV originally to find something that gave that clue. “Preacher,” “Mr Preach,” “Preacher,” and several others were already snagged. So I settled on “PRCHNG1.”

I thought it was clear, but apparently my fellow motorists either thought I was in some airborne division or maybe purchased hand guns. I don’t know.

As Christians, we’re told to be salt, light, and leaven, to clearly point others to Jesus.

When others see your works (cf. Mat. 5:16; 1 Pet. 2:12), do they conclude that you are a Christian? Or does the general tone and slant of your life lead people to contrary conclusions?

Be careful! Others are watching us, and they make assumptions about our character and lives by what they see. Let us make it plain (cf. Hab. 2:2)! 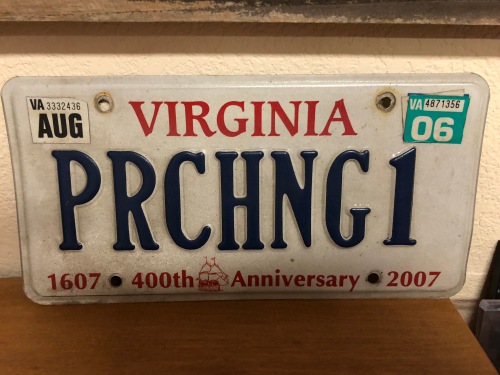