There is a passage that can be so disturbing because it is so adamantly clear. That passage is Romans 13:1-7. The early church fathers had a lot to say about this passage. They lived at a time when the government sponsored and led persecution and even execution of Christians simply for being Christians and sharing Christ with others. Nobody living in our country today has any experience with what this is like. Despite the pain and price inflicted by the Roman Empire on them, over and over the early Christians defended Paul’s words in Romans 13.

Whether you long for the Obama administration or love the Trump administration, whether you love or loathe your governor, senators, and congressmen, Romans 13 applies to us today.  Whatever your feelings about law enforcement or our judicial system, Romans 13 applies to us today. No one should be more conscientious about their relationship to the Civil Government than a Christian. What does this text reveal to us about “the earthly powers that be?”

The limit to this is if they command us (forbidding or making us) to do what would cause us to disobey God (cf. Acts 5:29). That is not the same as commanding us to do something that restricts our “rights,” “freedoms,” or “liberties.” There may be privileges we enjoy in a free nation which contribute to our comfort, happiness, and enjoyment. They may even be dubbed “unalienable rights” in our national constitution. May we never confuse earthly privilege with divine precept. The inspired Paul makes it clear that God is behind government for the reasons seen above. Peter, in a context about civil government, reminds us that we are “aliens and strangers” on this earth (1 Pet. 2:11; cf. 13ff). As we loudly, lustily sing, “This world is not my home, I’m just a passing through…”  “For such is the will of God that by doing right you may silence the ignorance of foolish men” (1 Pet. 2:15). May God give us the strength and wisdom to this end! 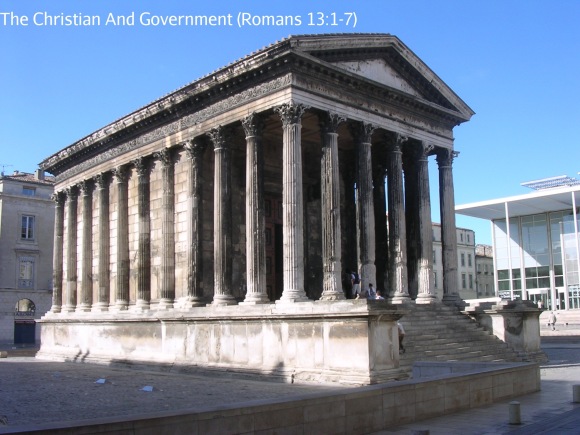