I had an interesting seat mate on my flight from Dallas to Denver yesterday.  Sue grew up the daughter of a TWA executive whose job was to ensure customer service around the world was up to par.  This meant she grew up in places like India, Egypt, and France. Her dad helped make Saudi Arabian Airlines an international carrier in the 1960s.  What was more interesting was what she told me about her husband, who she described as a longtime atheist.  His father was a “pastor” for a denomination which forbad watching TV, listening to the radio, and even considered playing marbles a form of gambling.  The children, including Sue’s husband, were raised in such a strict atmosphere.  One day, however, the boy found a room normally locked.  His father had always explained that this was the place where he studied for his sermons and did church work, but what the boy saw inside was a TV, radio, and so many of the things he had been told were sinful.  The man would eventually leave the boy’s mother for another woman.

When I heard that, I immediately thought about the powerful impact we have as parents but also as Christians.  There are those, especially those who know us best, who realize we claim to live by a higher, spiritual standard.  We make that claim when we attend church services, but we also do through the rules and convictions we hand down to our children.  We say certain things are important while other things are to be avoided.  This is essential, though it should be guided by a proper, thorough investigation of Scripture.  Yet, far more valuable than our explanations is our example.  Those we influence most profoundly should see a consistent pattern of righteousness in our attitude, speech, behavior, and apparent motivation.  We should be frightened at the thought of creating a “hidden room” which denies the very standards we set up for others in our lives to follow.  The discovery of such a place can devastate their faith.

In Romans 2, Paul is rebuking the Jews who condemned the Gentiles for their sins while committing the same things.  “You, therefore, who teach another, do you not teach yourself? You who preach that one shall not steal, do you steal? You who say that one should not commit adultery, do you commit adultery? You who abhor idols, do you rob temples? You who boast in the Law, through your breaking the Law, do you dishonor God?” (21-23).  Paul’s point there is that Jews, like Gentiles, are sinners in need of God’s favor.  However, the net effect of such hypocrisy is that it caused “the name of God” to be “blasphemed among the Gentiles” (24). 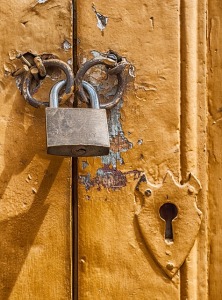 May we ever be in truth what we claim to be and tell others they should be.  Do you have a hidden room of spiritual horrors?  Dismantle it!

One reply on “WHAT’S IN YOUR HIDDEN ROOM?”

To many of us, including our preachers, do not practice what we preach.