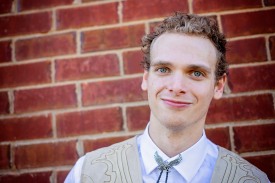 In the opening verses of Exodus 17, the faith of the Israelites is being tested. They’re in the wilderness and their human limitations begin to lead them to say and do things that end up defining their character for all eternity. It’s chapters in the Old Testament like this that set the stage for God to teach difficult lessons for them— and us.
There’s no water for them to drink and the feeling of thirst ignites a wild-fire of complaints. The text reads, “‘Therefore the people quarreled with Moses and they said ‘give us water to drink!’ And Moses said ‘Why do you do you quarrel with me? Why do you test the Lord?’” From here, it only escalates. The children begin to accuse Moses of attempted genocide.  They say, “Why did you bring us out here from Egypt? To die of thirst?” These people have seen the power of God, and they knew that the miracles which Moses performed were evidence of his Divine connection. The fact that they ask him for water when there is none proves that they knew Moses could do something about it.
It’s not only the Israelites that struggle with their rocky faith in God, however.  Moses also pleads with the Lord. He prays, “What shall I do with these people? They’re almost ready to stone me!” God responds by saying in verse five, “…take in your hand the staff which you struck the Nile, and go.” The wording is deliberate here. God is reminding Moses and the children what He has already done with that simple wooden staff in their past.  As Moses walked through that  wilderness leading his people, he holds in his hand a constant reminder. In his hand is a stick— a stick that God used to provide for His people.
If God can use some wood as an instrument to satisfy thirst and protect a large crowd of complainers, why do some still question God’s ability to care for us today? The place where Moses struck the rock was named, “Massah and Maribah” which translates, “Is the Lord among us or not?” It’s both a name and a question His children still ask from time to time today.
In the last section of this chapter, we can observe an intentional layout of the text. The army of Amalek challenges the Israelites to battle. With his faith restored in God’s power, Moses says, “Tomorrow I will stand on top of the hill with the staff of God in my hand.” On the day of battle, Moses holds the staff above his head. Whenever it was held up, the Israelites prevailed. When the staff was lowered, Amalek’s army prevailed.
Verses twelve and thirteen carry much application for us today. They say, “But the hands of Moses grew weary, and they placed a stone under him and he sat on it, while Aaron and Hur held up his hands on either side. So His hands were steady until the going down of the son.” At least three major lessons can be derived from this section of scripture.
Lesson one, church leaders can’t lead us to our eternal victory alone. Moses did not win the battle that day. God did.
Lesson two, church leaders need help because even a stick can become heavy after a while. God never intended for one man to lead His people. There must be an eldership so that these men can help each other hold up the word of God. Their victory came when four more hands took on the burden and shared the weight.
Lesson three, there is no obstacle we will face that God’s faithful people can’t overcome. Even if all the armies in the world had decided to attack the Israelites that day, three men and God would have still brought them to victory. If God can accomplish so much with a piece of wood, who are we to limit His power today? There is nothing we can’t do under the leadership of, not mere men, but God. Moses knew God could accomplish anything through him and some wood— today we would do well to remember what God can do with us and our willingness to serve.

2 thoughts on “Six Hands And A Stick ”