Neal Pollard
I do not know how many friends make up your inner circle of confidantes, companions, and cheerleaders, but there is value in positive, godly friends. We take comfort from scriptures that remind us “a friend loves at all times, and a brother is born for adversity” (Pr. 17:17), “a man who has friends must show himself friendly, but there is a friend who sticks closer than a brother” (Pr. 18:24), “faithful are the wounds of a friend, but the kisses of an enemy are deceitful” (Pr. 27:6), “the sweetness of a man’s friend gives delight by hearty counsel” (Pr. 27:9), “do not forsake your own friend” (Pr. 27:10), and “as iron sharpens iron, so a man sharpens the countenance of his friend” (Pr. 27:17). Only in very wicked times must we lament, “Do not trust in a friend; do not put your confidence in a companion” (Mic. 7:5a).

The Bible reveals four good friends, friends who surely were like the ones extolled in the Proverbs. I am not referring to Job’s four “friends,” Eliphaz, Bildad, Zophar (the “miserable comforters”), and Elihu. Instead, these friends’ names are locked away in the mind of God, known only to their contemporaries and lost to history. But, they were friends in deed. Drawing mainly upon Mark’s gospel account, we find several reasons–implied or plainly stated–why they should be considered good friends.

They cooperated for the good of their friend (2:3). These individuals befriended a paralyzed man, a man in need of healing. Whose idea was it? Was one or two of them stronger? Did one of them know the way? What did each contribute? How far did they have to carry him? Scripture answers none of these questions, but we are told that all four of them took him to Jesus. Apparently, all four of them were needed. Hoisting “dead weight” would have required cooperation. In my experience, no one is brought to the Lord alone. It requires a team effort, even if only one invites his or her friend to come to the assemblies or to engage in a study. The “friend” needs encouragers, instructors, and friends!
They persisted for the good of their friend (2:4). These men might have given up and rationalized, when they arrived at the house where Jesus was and found it overcrowded, that they tried. No, they stopped at nothing to get this man to Jesus. They took the road less traveled! It was apparently not as easy as simply lifting straw off of a roof. My son, Gary, tells me that there were three layers of roof to penetrate in the average first-century, Palestinian house. As he taught the teen class last night, “The roof was made up of three layers. First, a basic wooden platform was probably nailed into the body of the house. Second, there appears to have been a layer of insulation that was probably made up of rocks over a base and held together with tar. Third, the regular roof was made up of straw and the like. They not only dragged a man onto a roof, they also to dug thru the layers of roofing & even to get onto the roof would take a lot of trouble.”
They believed for the good of their friend (2:5). The Bible says that Jesus saw THEIR faith and then addressed the friend’s needs. Those friends could not have faith for this man, but their faith put him in a position to have faith himself. Jesus noticed their faith before He turned His focus to the paralyzed man. Think about how we can bless others’ lives by bringing them to Jesus. Also, think about how heaven regards us for making such efforts.

What kind of friend are you? Are you the kind willing to bring your friend to Jesus? Remember, Jesus forgave the sins of the man brought to Jesus by his friends. All of us have friends in need of God’s forgiveness. Let us have the courage to bring them to Jesus! 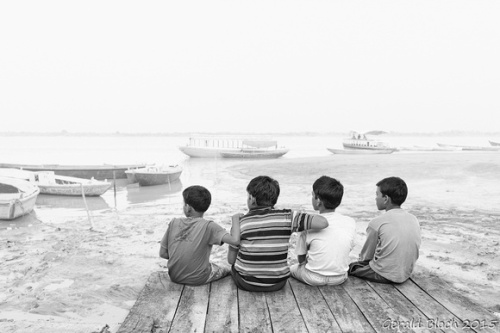 One thought on “FOUR GOOD FRIENDS”